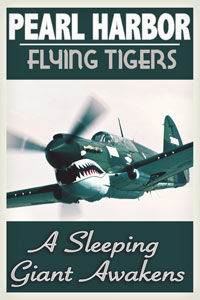 December 7, 1941 would bring the United States screaming into the ever expanding global conflict. There is no one event which galvanized the people of the United States more so than the sudden and deliberate attack the Japanese launched on U.S. forces in Hawaii. It was their intention to wipe out the Pacific fleet in its anchorage, which had been thought to be impervious to torpedo attack from the air.

By mid-day that fateful Sunday it was clear, the anchorage could be attacked – and the fleet could be brought to the brink of destruction. From amid the flames and wreckage however, a terrible resolve began to fill the most powerful nation on earth. A Sleeping Giant had been awakened.

America was caught by surprise on the morning of December 7, as air raid sirens rang out across Pearl Harbor, many were still in their bunks. Realizing the desperate situation they were in, several pilots rushed to their airfields, hoping to effect some sort of defense in their P-40 Warhawks – the Army Air Force’s front line fighter at the time. Two of the pilots, Maj. George Welch and Lt. Col. Ken Taylor were returning from a Christmas Party and managed to make it into the air, each claiming several enemy aircraft during the course of the morning. Against all odds, some small victory had been snatched, by resolute Americans, from what was otherwise a resounding defeat.

Even as Pearl Harbor was shocking Americans, there were some who had seen the writing on the wall, and had elected to join the war on their own much sooner. These men, who had volunteered to fight alongside the Nationalist Chinese forces, against the Japanese became known as the Flying Tigers – or more formally, the American Volunteer Group. Identified by the iconic shark’s teeth found on the nose of their P-40s, these men who would fight valiantly – were a credit to the United States, and remain an indelible mark on the history of China today.