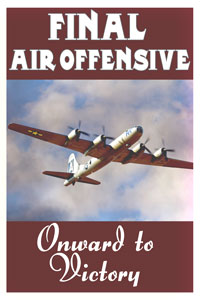 Even as Nazi Germany surrendered in Spring 1945, the war looked set to continue into 1946, with no sign that the Japanese were going to relent. Allied forces knuckled down for what they knew would be a long slog against a seemingly intractable enemy, none of them knowing that August would bring a cataclysmic series of events which would force the Empire of Japan to its knees, ending the War, and saving millions of lives.

Of the 3,970 Superfortresses produced during World War II, only two remain airworthy – and both will be participating in this fly over to mark the end of the war. The B-29 was developed as a weapon which would allow the USAAF to strike at the very heart of Japan, flying further and higher than the bombers which preceded it. The advances in technology during the war, including remote controlled gun turrets and cabin pressurization did little to ease the grueling nature of the war for the crews, who were facing ramming attacks from the increasingly determined Japanese. Amidst the tempo of the nightly fire-bombing missions over Japan, one B-29 unit was training to use a single airplane, to drop a single bomb and end the war. On Aug. 6, 1945 the Enola Gay dropped the first atomic bomb, nicknamed Little Boy on Hiroshima. Three days later, Fat Man was dropped on Nagasaki by the B-29 nicknamed Bockscar. Becoming aware of the terrible cost which would be brought by continued fighting – the Emperor of Japan would surrender his nation unconditionally – ending World War II.

**The aircraft listed have agreed to participate in the flyover, but due to factors such as weather or mechanical issues,participating aircraft are subject to change without notice.**